Police Administration includes the Office of the Chief of Police and the Professional Standards Unit.

Chief Robert "Jesse" Godfrey has 28 years of law enforcement experience. He began his law enforcement career with the Ormond Beach Police Department as an officer from July 1988 to October 1989 before going to work for the Daytona Beach Police Department, where he retired as a lieutenant serving in the Patrol Division. He has served as DPBD's asset forfeiture officer, narcotics detective, patrol sergeant, training sergeant, street crimes sergeant, special investigations sergeant, patrol lieutenant, training lieutenant and narcotics lieutenant. He was also a member of the SWAT team serving as a team member, team leader and team commander.
In May 2011, Chief Godfrey returned to the Ormond Beach Police Department as a Lieutenant and rose through the ranks to became Captain in October 2014 and Chief in April 2016.
Chief Godfrey has a Bachelor of Science Degree in Criminal Justice and a Master's Degree in Public Administration from the University of Central Florida, and has successfully graduated from the 252nd U.S. Department of Justice National FBI Academy, as well as the 47th Southern Police Institute Command Officers Program. Additionally, Chief Godfrey has successfully completed numerous other professional development training and certification programs.
As stated in the OBPD Mission Statement, the Police Department's goal is to enhance the quality of life in our community, protect our citizens from crime through the provision of effective, efficient, and responsive police services and an organizational commitment to community policing.
Our actions are guided by principles of courtesy, respect for the rights of others, and diligence in the performance of our duties.

It is the policy of this department to patrol, in a proactive manner, to aggressively investigate suspicious persons and circumstances and to actively enforce motor vehicle laws. Department patrols will be conducted while insisting that citizens will only be stopped or detained when there exists reasonable suspicion to believe they have committed, are committing, or are about to commit, an infraction of the law. Officers will not make traffic contacts, field contacts, or asset seizure/forfeiture efforts based solely on bias-based or racial profiling.

Any citizen having a concern or complaint involving an officer or the department may call 386-677-0731 and ask for Chief Godfrey. 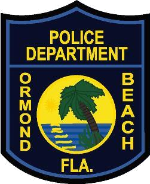